So far on this blog I've mentioned a few times how important it is for instructors to understand the stages of development for younger students.

I've decided to put together a series of posts about each stage of development for children. This is the second post of the series. If you missed last week's post, check is out here...

This week, we are focusing on the youngest age group we teach here at the Traditional Martial Arts Center: 4 Year Olds!

I love teaching four year olds! The reason why is because they are a big challenge, but also they love to have fun.

Now, you may remember from my last post that children develop in four distinct categories: Physically, Intellectually, Emotionally, and Socially.

I'm going to break down each category for you. This way, you'll know exactly what to expect from your child and see how martial arts can help foster proper development for your little one.

At four years old, kids are becoming very active physically. However, they are still early in the process of developing muscle tone. This may lead them to struggle with tasks that older kids or adults do easily.

A four year old may only be able to hold their arms out to the side for 5 seconds before they begin to drop.

Sitting up straight for longer than 5-10 seconds is difficult due to under developed core muscles.

Being able to balance on one leg, or run and jump without falling is limited due to the low development of leg muscles.

Because of this, many uneducated instructors, coaches or parents might think their child/student lacks focus or is being lazy when they don't sit up straight or fall down often. When that's usually not the case.

Now, what's great is that in Martial Arts classes here at TMAC, we have a ton of great ways to help your child develop through their current stage of development. For example, there is a game I love to play with our 4 year olds called the "ABC Game."

Here's how it works:

All the student's stand on one leg. The instructor starts reciting the ABC's . Each time a letter is called out, the students kick with the leg in the air without putting their foot down. If they lose their balance and touch their foot on the ground, they sit down until everyone else has finished. At first, the students might only get through the first 3 or 4 letters of the alphabet before they lose their balance. But, with a little practice they get further and further through the alphabet., improving leg strength, core strength and balance!

Verbal communications skills are a major aspect of intellectual development for this age group. At four year's old, children still often have trouble following verbal cues only. They also struggle with processing and repeating commands with 3 or more steps.

For example, if I was teaching a class and said "Ok everyone, I want you to move forward and show me a kick, a punch, a high block and a yell! Then run back to the back of the room and sit down," it would be likely that most of the students wouldn't perform the tasks properly.

They might remember that they have to kick and punch and maybe block. But, they will probably miss the yell, and forget to run back and sit down.

Again, someone who isn't aware of this stage of development might get frustrated and assume that the kids aren't listening to the instructions. But, in reality it's much more likely that their brains just aren't ready to process so much verbal communication at one time. Don't forget, English is still very new to kids this age.

So, how does Martial Arts help develop communication skills in class?

I always make sure I break things down into simple, well defined, and understandable steps. And I ALWAYS get verbal confirmation that the student's understand what I'm telling them. It may sound simple, but it works wonderfully every time!

At four years old, children are still developing an understanding of what emotions they are feeling. So, it's common for them to act out when they are overwhelmed by emotions. When they feel uncomfortable with an emotion, they tend to go towards whatever gives them comfort. So, they might go to their parents, or they might just freeze and stop responding to questions.

I see this the most when a new student comes in for the first time. A lot of times, a child will be really excited for their first karate class. But, it can be very intimidating when they arrive and see an adult black belt and an entire class of Karate kids. So, they start to feel nervous and the only thing they can think to do is grab on to their mom or dad. They may even say they don't want to try the class anymore.

But, with a little patience it's easy to get the nerves to go away. All I do is tell the brand new student that they can sit with their parent and watch class as long as they want. As soon as they feel like they want to jump into class, they can let me know and they're welcome to join in. Once the new student feels safe and sees how much fun the class is, they immediately want to try it and by the end of class, they can't wait to come back.

Because their language skills aren't fully developed, kids at this age often communicate non-verbally. So, their social interactions involve a lot of mocking and touching. They will often imitate each other as a way to build a connection. Also, at this age they begin to learn how to play with others by sharing and taking turns at this age.

Games are a great way to encourage social development for four year olds. We have a lot of simple and fun games that we play in class.

One of my favorites is the Karate Relay Race.

In a karate relay race, students are divided into teams of two or more. Students take turns running across the training floor to strike a pad with a punch, kick, or other technique. The team who completes the relay first wins. This game is a great way to get young students to understand how to take turns and share attention.

As you can see, with just a little bit of understanding of the Physical, Intellectual, Emotional and Social stages of development, you can gain a HUGE amount of perspective on how your four year old acts, thinks and interacts with the world.

At TMAC, we always keep this in mind when designing our classes and teaching your child. That way, we can help them grow and learn to reach their full potential!

Want more great information about how your child develops as they grow?

Check back next week for part three, where I'll be discussing the next age bracket of childhood development...

How to Talk About Bullying with your Kids

How to Help Your Child Reduce Procrastinating

5 Strategies to Use When Kids Don't Want to Go to Martial Arts Class.

5 Tips To Help You Learn Your New Martial Arts Form

How Martial Arts Enhances Your Child's Stage of Development: Part 5

How Martial Arts Enhances Your Child's Stage of Development: Part 4 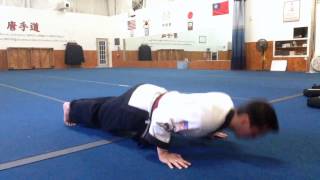 Mastering the Perfect Push Up: Plus 4 Common Mistakes to Avoid